The longest Monument of the year, Milan-San Remo takes place on Saturday August 8, 2020. The spring Classic was originally scheduled for March 21, but was forced to move dates due to the coronavirus pandemic.

The UCI WorldTour race is the longest of the one day spring Classics, providing a showcase of some of the best riders in the world over 291km.

The race is now in its 111th year, and boasts a stat studded list of victors, the most recent being Julian Alaphilippe in 2019 who attacked to create a selection of 10 riders, before proving himself the strongest in the sprint.

The route is 291km in length it’s not expected that much will change for the 2020 edition, though we’ll update this page as more information becomes available.


The day sees riders travel from Milan to the Riviera di Ponente via Pavia, Ovada and Passo del Turchino.

They then descend towards Genoa Voltri, and head west, through Varazze, Savona, Albenga, Imperia and San Lorenzo al Mare before the three “Capi” – Capo Mele, Capo Cervo and Capo Berta.

Then it all gets spicy as the peloton reaches two notable climbs, the Cipressa and Poggio di Sanremo.

The Cipressa is just over 5.6km long with a gradient of 4.1 per cent, and followed by a technical descent down to the SS 1 Aurelia road.

Then there’s the climb of the Poggio di Sanremo – which is 3.7 kilometres long, with an average gradient of less than 4 per cent and maximum of 8 per cent. 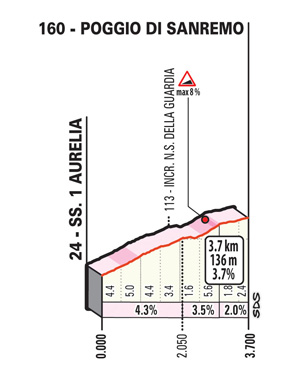 It might be shallow, but it starts 9km before the finish, and it’s a narrow road with four hairpins in the first 2km.

The descent is highly technical again. Once the downhill slope has been negotiated, there’s 2km of long, straight urban roads before a left hand bend at a roundabout 850m from the finish straight.

Despite being known as the ‘Sprinters’ Classic’, the Italian race would not be as prestigious as it is were it a straightforward procession to a bunch sprint, and instead the race is characterised by its tortuous length, thrilling conclusion and delicate balancing act between sprinters and attackers.

The introduction of La Manie in 2008 gave the advantage to attacking puncheurs, as a difficult, significantly-positioned climb to gain an advantage over those hoping for a bunch sprint. It contributed to a handful of more selective editions – Fabian Cancellara won from a solo break in 2008 and Simon Gerrans from a group of three in 2010, and in both 2011 and 2013 a group of seven contested the finish, won by Matt Goss and Gerald Ciolek respectively.

When La Manie was dropped in 2014, the organiser’s initial intention had been to make the route even harder by replacing it with the Pompeiana in a slot far closer to the finish. But that climb was deemed unsafe due to the possibility of landslides, so that since 2014 the race has featured neither climb.

Now the dynamic of the route has shifted comprehensively back to the sprinters.

After Alexander Kristoff (Katusha) won the sprint from a sizeable peloton in 2014, the finish was moved back to its traditional finishing straight of Via Roma, and another sprinter was triumphant in the form of John Degenkolb (Giant-Alpecin) in 2015 and Arnaud Démare (FDJ) in 2016.

For the bold and the brave the Cipressa provides a potential launchpad for an attack at just over 20km from the finish, but for the more realistic, it’s the Poggio.

On the back of around 280km of racing the riders are exhausted upon reaching it, and, peaking at 5.5km from the finish, any rider who goes over the top first with a gap has a chance of zooming down the descent and holding off the sprinters for victory on the Via Roma.

The race is usually broadcast on Eurosport, with live coverage as well as a highlights package.

Elsewhere in the world, you can catch it live on Sporza (Dutch) and RTBF (French); Italy’s Rai Sport 2 and SBS in Australia will also show footage.

Dave Brailsford expects cases after rest day coronavirus tests, but confident Ineos will be all clear